Charlotte has been one of the most popular cities for retirees to move to for some years now and the number of 55+ adults moving to the Queen City continues to increase. Forbe’s 2022 List of Best Places To Retire lists Charlotte as a top 25 best city to retire in. SmartAsset.com lists Charlotte as a top 10 city where retirees are moving. Charlotte is now the 7th fastest growing large U.S. metro area.

CHARLOTTE, NC RANKED A BEST PLACE TO RETIRE IN 2022 BY FORBES

Forbes’ “Best Places To Retire 2022” list has listed Charlotte as one of the top 25 cities to retire in. Just one other city in North Carolina (Winston Salem) made the top 25 list. Selection of best places to retire was based on a comparison by Forbes of more than 800 cities in America on everything from housing costs, taxes, healthcare, air quality, crime and climate change and natural hazard risks. Here are some of the reasons, Forbes is “high on Charlotte:”

CHARLOTTE, NC ALSO NAMED A TOP 10 CITY WHERE RETIREES ARE MOVING BY SMARTASSET.COM 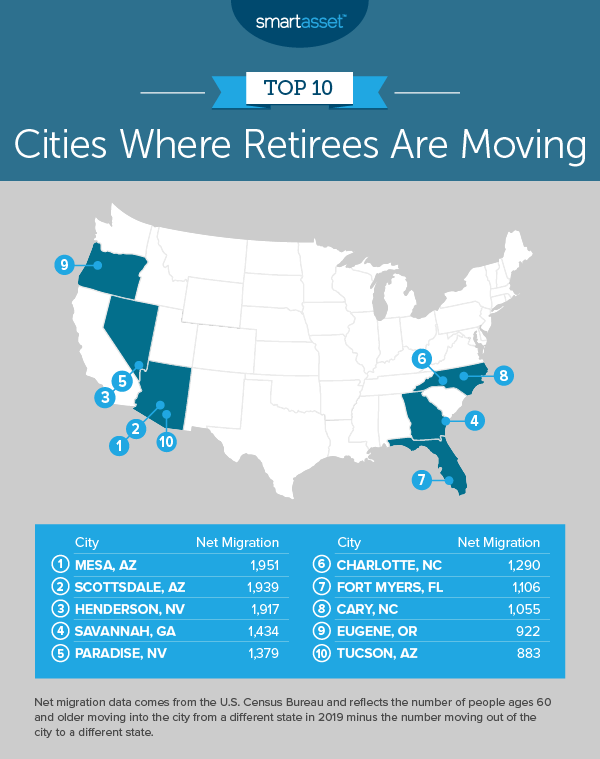 WHAT THIS MEANS FOR THE GREATER CHARLOTTE REGION RETIREES

Home buyers, including retirees and empty nesters, already in the Greater Charlotte region or moving here will continue to face strong competition and tight housing inventory in the coming months. Home buyers need to be prepared for strong competition for homes, which means bidding wars in certain areas and days on market remaining low. Home affordability will also continue to suffer.

Despite a decrease in population growth nationally, North and South Carolina continue to add population at a faster clip than much of the rest of the nation, according to the US Census. Combined with population growth in Georgia, Tennessee, and Florida,  the southeast will  become an increasingly bigger player both economically and politically as people move here.

WHERE ARE PEOPLE MOVING FROM TO GREATER CHARLOTTE?

People have continued to move to the Greater Charlotte area in large numbers before, since, and now after the pandemic. Some 120+ people are moving to the Charlotte region every day. The population in Charlotte, Gastonia and Concord has grown by 150,000 people within the last decade, according to the latest Census.

People are moving here from all over the U.S. but most, around 6,500, came from New York City. According to Senior Vice President of Business Recruitment Stephen Pearce at the Charlotte Business Alliance,  “Charlotte area is one of the top 10 markets for those people who are looking to move out of the Manhattan area.” 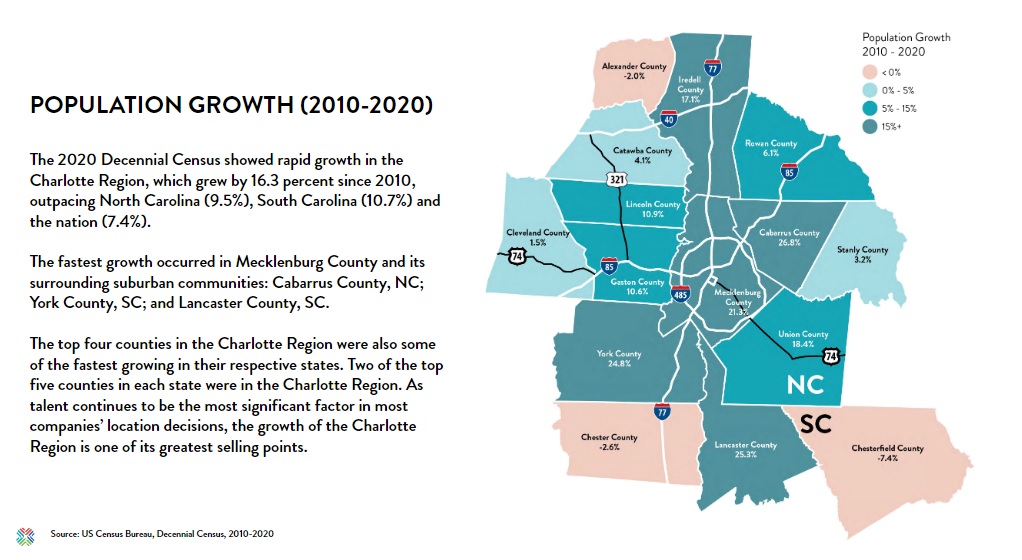 The Charlotte Region’s growth of 16.3% since 2010 is more than double the national average. Charlotte is now the 7th fastest growing large U.S. metro area. The Charlotte Region is expected to grow by another 50% by 2050 with the region’s population growing from about 3 million to 4.5 million.

POPULATION AND DEMOGRAPHIC CHANGES IN THE CHARLOTTE REGION

WHY ARE PEOPLE MOVING TO THE CHARLOTTE REGION?

Reasons for these moves include people moving here for jobs, for a lower cost of living, lower taxes, more space and less density, better quality of life, to follow children to be closer to grandchildren. The Charlotte region ranks #1 for baby boomers who’ve chosen to retire close to their grandchildren, according to Meyers Research. These baby boomers now have a new name — “baby chasers.” And because Charlotte is one of the top cities in the nation attracting millennials, it’s become a top destination city for the parents of those millennials, as well.

MoneyGeek recently ranked Charlotte as the 7th best city for finding a job, based on key metrics like job and wage growth, unemployment rates, and housing affordability. Through 2028, North Carolina forecasts 300,000 new jobs, most of which will be created in Charlotte and nearby Raleigh. Future job growth in Charlotte region over the next 10 years is predicted to be 45.2%, which is higher than the US average of 33.5%.

The Charlotte Region’s First Quarter 2022 got off to a strong start with the largest number of announced jobs in three years — 4,680 new jobs, a net new job change of 16,100, and an unemployment rate of just 3.7%.

THINKING ABOUT MAKING YOUR OWN MOVE TO CHARLOTTE TO RETIRE?

Moving to another town or state is, no doubt, a significant event in anyone’s life. It’s even more so for people moving in their “silver years.” Carolinas Realty Partners with Coldwell Banker Realty, have helped hundreds of Charlotte area newcomers relocate to the Greater Charlotte area. We are relocation specialists and for 20+ years, we’ve helped clients in all stages of life begin their new lives in places like Charlotte, Matthews, Mint Hill, Waxhaw, Weddington, Marvin, Indian Trail in North Carolina and to Fort Mill, Lake Wylie, Tega Cay, Rock Hill and Indian Land in South Carolina.

If you’re planning a move to the Charlotte region, REQUEST OUR FREE RELOCATION PACKAGE TODAY. It’s full of useful and important information about life in the Charlotte area and its many neighborhoods and it’s a great way to begin discovering the Charlotte metro area and everything it has to offer.

Want a “sneak peek” at what life in the Charlotte area is all about? Click here. 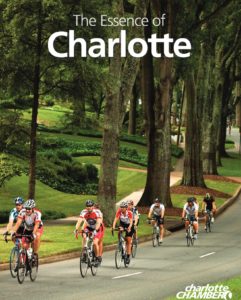 Not quite ready to come to Charlotte? Until you’re ready to come to town, we can correspond by email and communicate by phone to determine the type of home, price, lifestyle, and neighborhood you are looking for. I can send you every home or property coming on the market that meets your criteria by email.

When you arrive to visit Charlotte, we’ll be ready to introduce you to the neighborhoods and homes that interest you most. We’ll discuss subdivisions, commuting, lifestyle options, local market conditions… anything that is important to you. After 20+ years of serving relocating clients in the Charlotte metro area, we know it inside and out and our goal is to make your transition and move to Charlotte as seamless and smooth as possible.

If you have a home to sell before relocating to the Charlotte area, we can provide introductions to some of the top Realtors® in your area to help you get your home sold at top dollar as quickly as possible and with a minimum of stress and inconvenience to you.

REQUEST OUR FREE RELOCATION PACKAGE TODAY. We’ll send it right out. You’re under NO obligation, so you can’t go wrong!

If you’re considering relocating to the Greater Charlotte region or already live here, I’d love an opportunity to earn your business, exceed your expectations, and to show you why experience matters and how:

“The Right Broker Makes All The Difference.” 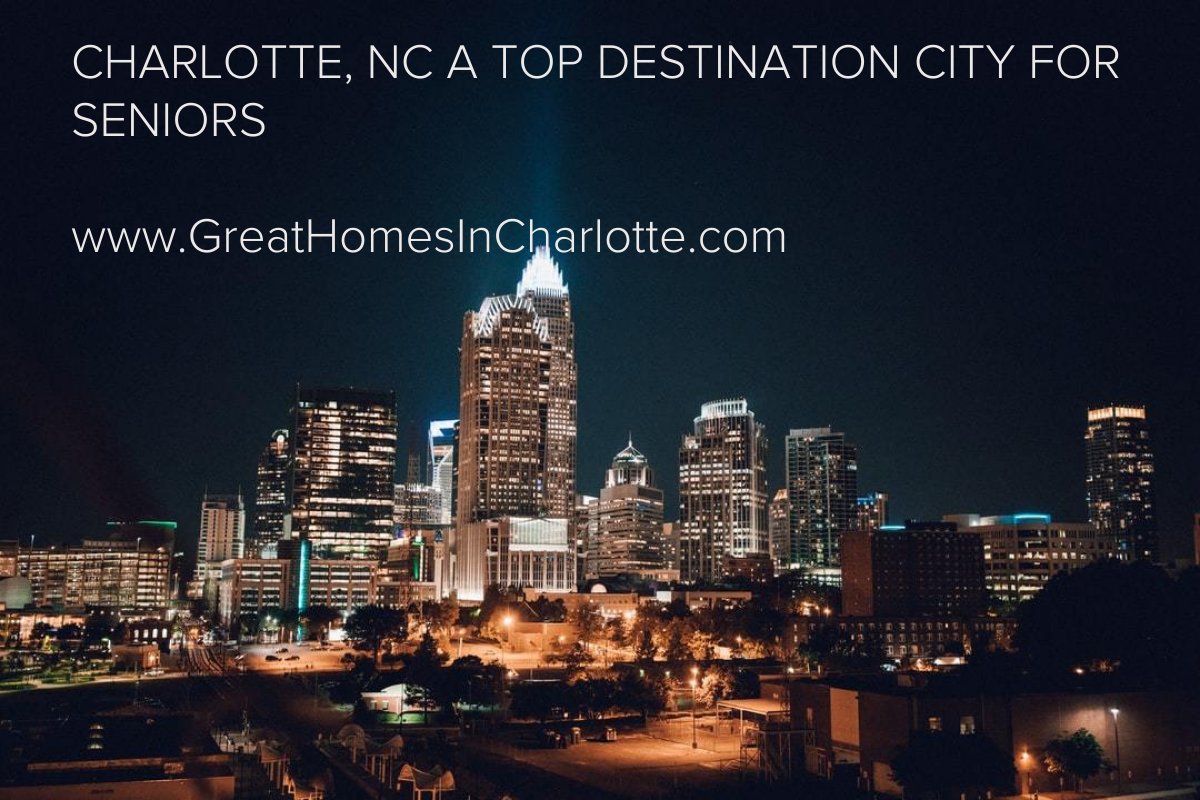