Real estate markets 2023: what’s ahead in the new year? It’s been a wild few years in the real estate market. From price fluctuations to skyrocketing mortgage rates, there’s been plenty of drama to go around. But what will the year ahead hold? We share leading economists’ predictions for 2023. Find out where mortgage rates and home prices are headed; when the pace of home sales is expected to once again pick up; what it call means for homeowners, buyers, and sellers.

In 2022 one factor drove the real estate market more than any other: rising mortgage rates.

In March 2022, the Federal Reserve began a series of interest rate hikes in an effort to pump the brakes on inflation.1 And while some market sectors have been slow to respond, the housing market has reacted accordingly.

Both demand and price appreciation have tapered, as the primary challenge for homebuyers has shifted from availability to affordability. And although this higher-mortgage rate environment has been a painful adjustment for many buyers and sellers, it should ultimately lead to a more stable and balanced real estate market.

So what can we expect in 2023? Will mortgage rates continue to climb? Could home prices come crashing down? While this is one of the more challenging real estate periods to forecast, here’s what several industry experts predict will happen to the U.S. housing market in the coming year. 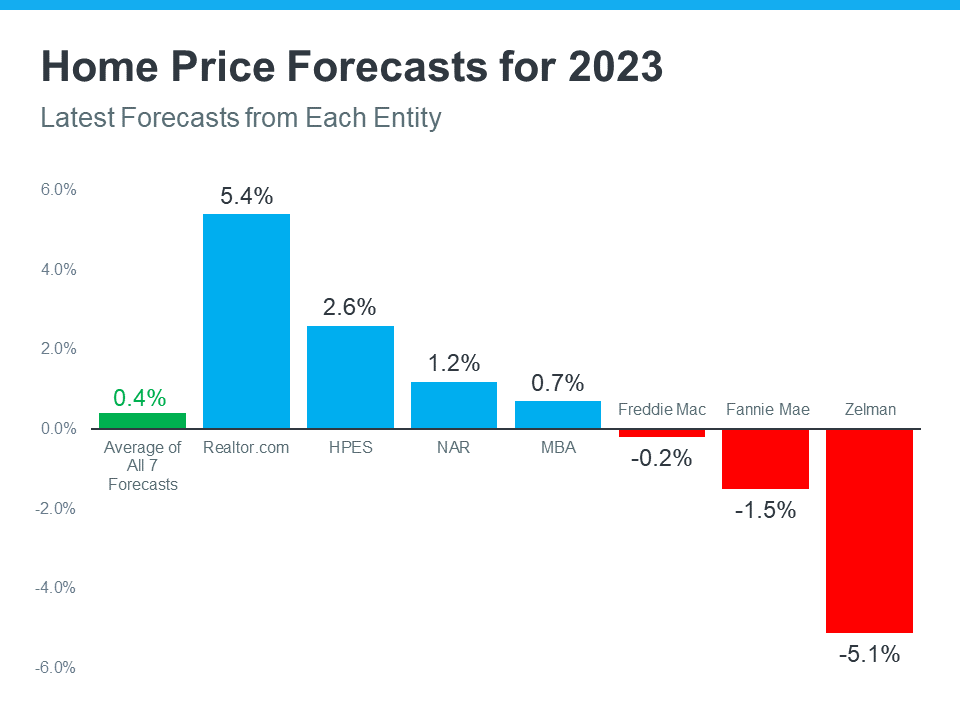 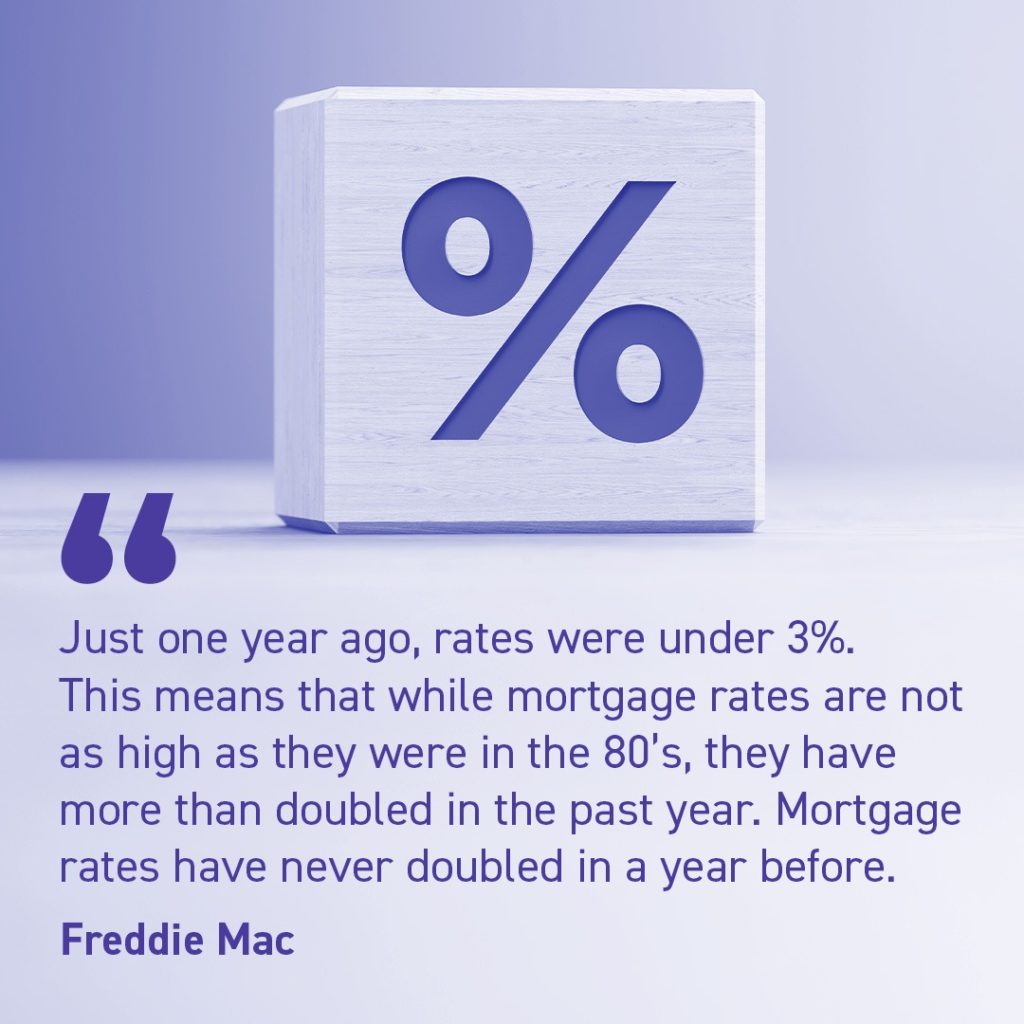 In 2022, 30-year fixed mortgage rates surged from roughly 3% in January to around 7%. According to Rick Sharga of real estate data company ATTOM, “We’ve never seen rates double in so short a period.”2

In an interview with Bankrate, Nadia Evangelou, senior economist for the National Association of Realtors, shares her vision of three possible mortgage rate scenarios:3

Realtor.com forecasts something similar to scenario #2 above: “Mortgage rates will average 7.4% in 2023, trickling down to 7.1% by year’s end.”4 The Mortgage Bankers Association, however, projects something closer to Evangelou’s scenario #3, with the 30-year fixed rate declining steadily throughout the year, averaging 6.2% in Q1 and 5.2% by Q4.5

Economists at Fannie Mae fall somewhere in the middle. In a recent press release, they predicted that the U.S. economy will experience a “modest recession” this year.6 But in their December Housing Forecast, they project that 30-year fixed mortgage rates will only fall by half a point from an average of 6.5% in Q1 to 6.0% in Q4.7

“From our perspective, the good news is that demographics remain favorable for housing, so the sector appears well-positioned to help lead the economy out of what we expect will be a brief recession,” said Fannie Mae Chief Economist Doug Duncan.6

What does it mean for you?  Even the experts can’t say for certain where mortgage rates are headed. Instead of trying to ”time the market,” focus instead on buying or selling a home when the time is right for you. There are a variety of mortgage options available that can make a home purchase more affordable, including adjustable rates, points, and buydowns—and keep in mind you can always refinance down the road. We’d be happy to refer you to a trusted mortgage professional who can outline your best options.

It looks like the home-buying frenzy we experienced in recent years is behind us. While the desire to own a home remains strong, higher mortgage rates have made it unaffordable for a large segment of would-be buyers.

Many economists expect the number of home sales to continue to decline this year, leading to an increase in listing inventory and days-on-market, or the time it takes to sell a home. But, there is a wide range when it comes to specifics.

Economists at Fannie Mae forecast that total home sales will fall by around 20% this year before rising again by nearly 15% in 2024.7 National Association of Realtors Chief Economist Lawrence Yun projects a less extreme dip of 7% in 2023 with a rebound of 10% next year.8

Realtor.com Chief Economist Danielle Hale foresees something in between. “The deceleration in home sales is likely to continue as high home prices and mortgage rates limit the pool of eligible home buyers. We anticipate that existing home sales will decline another 14.1% in 2023.” She expects this drop in sales to lead to a nearly 23% increase in inventory levels this year, offering more choices for buyers who have struggled to find a home in the past.9 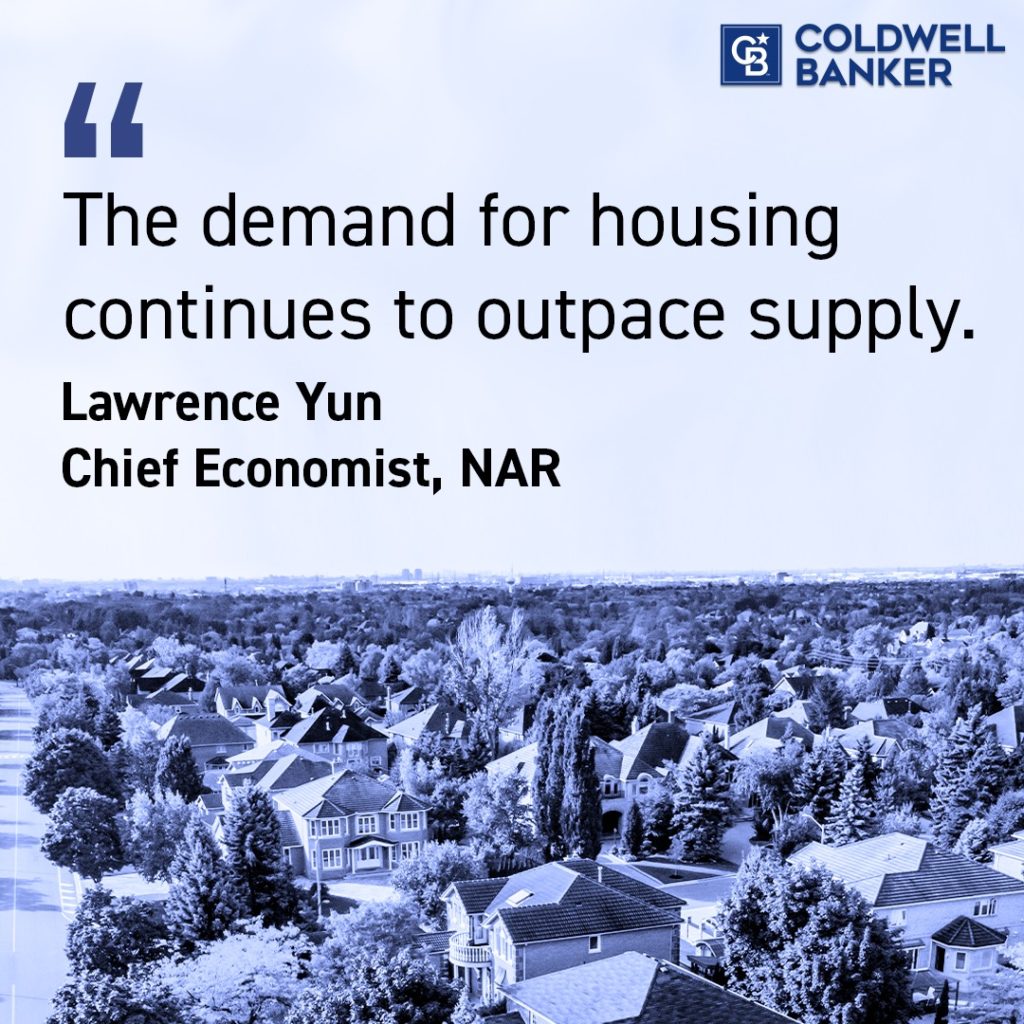 However, given the severe lack of housing supply, even with a double-digit increase, the market is expected to remain relatively tight and below pre-pandemic levels. Hale points out: “It’s important to keep historical context in mind. The level of inventory in 2023 is expected to fall roughly 15% short of the 2019 average.”9

What does it mean for you? If you are planning to buy a home, but been frustrated by a lack of inventory in the past, 2023 may bring new opportunities for you to find the perfect home. And today’s buyers have more negotiating power than they’ve had in years. And keep in mind that while the housing market has cooled, there’s still an imbalance between supply and demand. Even though buyer demand has eased because of higher mortgage rates, there’s still a deficit of homes for sale due to underbuilding over the past 15 years. Contact us to find out about current and future listings that meet your criteria. 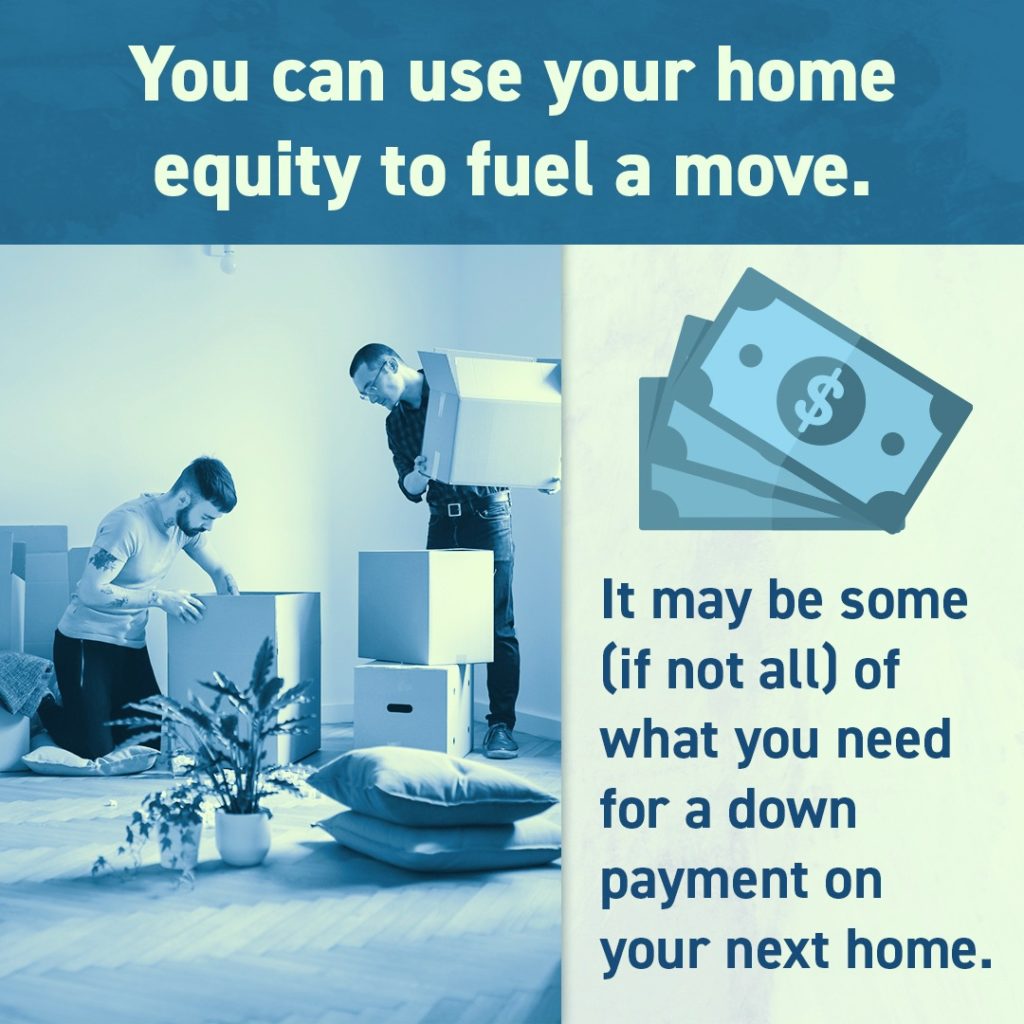 If you’re hoping to sell, you may want to act fast; rising inventory levels will mean increased competition. We can help you chart the best course to maximize your profits, starting with a professional assessment of your home’s current market value. Although home price increases have decelerated, homeowners still have positive equity gains during the past 12 months. You can use your equity to help “fuel” your next home purchase. Reach out to schedule a free consultation.

While some economists expect home prices to fall this year, many expect them to remain fairly stable. “For most parts of the country, home prices are holding steady since available inventory is extremely low,” said Yun at a November conference.8

Nationally, Yun expects the average median home price to tick up by 1% in 2023, with some markets experiencing greater appreciation and others experiencing declines.8 Economists at Fannie Mae offer a similar projection, forecasting a slight decrease in their Home Price Index of about 1.5%, year-over-year.7

Other experts foresee a larger fluctuation. Hale expects U.S. home prices to rise by 5.4% this year, while Morgan Stanley is forecasting a 7% drop from the peak in June 2022.9,10

Still, many economists agree that a housing market crash like the one we experienced in 2008 is highly unlikely. The factors that caused home prices to plunge during the Great Recession—specifically lax lending standards and a surplus of inventory—aren’t prevalent in our current market.10 Therefore, home values are expected to remain comparatively stable. 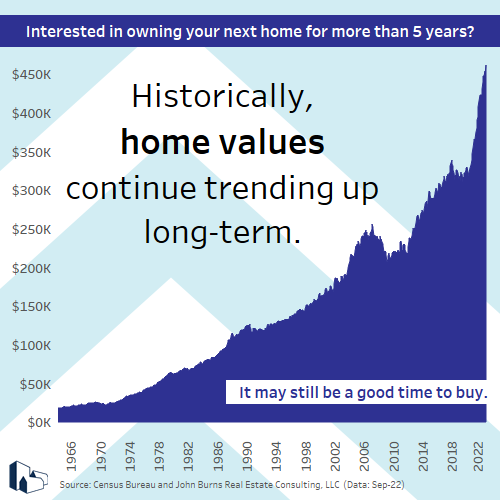 What does it mean for you?  It can feel scary to buy a home when there’s uncertainty in the market. However, real estate is a long-term investment that has been shown to appreciate over time. Did you know that since 1991, on average, nationwide home prices have appreciated by 290.2%? And keep in mind that the best bargains are often found in a slower market, like the one we’re experiencing right now. Contact us to discuss your goals and budget. We can help you make an informed decision about the right time to buy.

And if you’re planning to sell this year, you’ll want to chart your path carefully to maximize your equity and profits. Contact us for recommendations and to find out what your home could sell for in today’s market.

Rent Prices Will Continue To Increase In 2023

Affordability challenges for would-be buyers, inflationary pressures, and an overall lack of housing could continue to drive “above-average” rent price increases in much of the country.11 The Federal Reserve Bank of Dallas expects year-over-year rental price growth to tick up to 8.4% in May before moderating later in the year.12 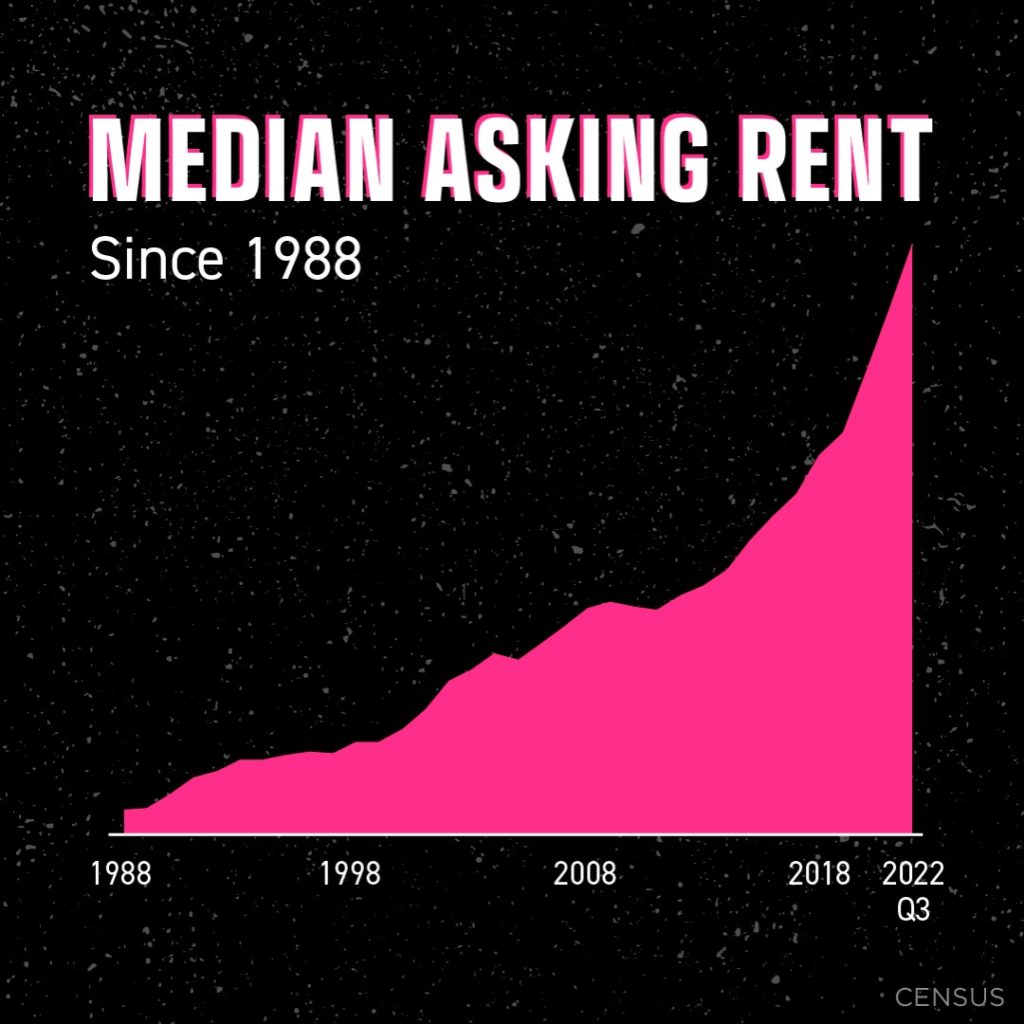 According to Hale, “U.S. renters will continue to face challenges from limited supply and excess demand in the coming year that will keep upward pressure on rent growth. At a national level, we forecast rent growth of 6.3% in the next 12 months, somewhat ahead of home price growth and historical rent trends.”9

However, there are signs that the surge in rent prices could be tapering. According to Jay Parsons, head of economics for rental housing software company RealPage, there’s some evidence of a slowdown in demand. He predicts that market-rate rents will rise just 3.3% this year. Still, analysts agree that a return to lower pre-pandemic rental prices is unlikely.10

What does it mean for you?  Rent prices are expected to keep climbing. But you can lock in a set mortgage payment and build long-term wealth by putting that money toward a home purchase instead. Reach out for a free consultation to discuss your options.

And if you’ve ever thought about purchasing a rental property, now may be a perfect time. Call today to get your investment property search started. 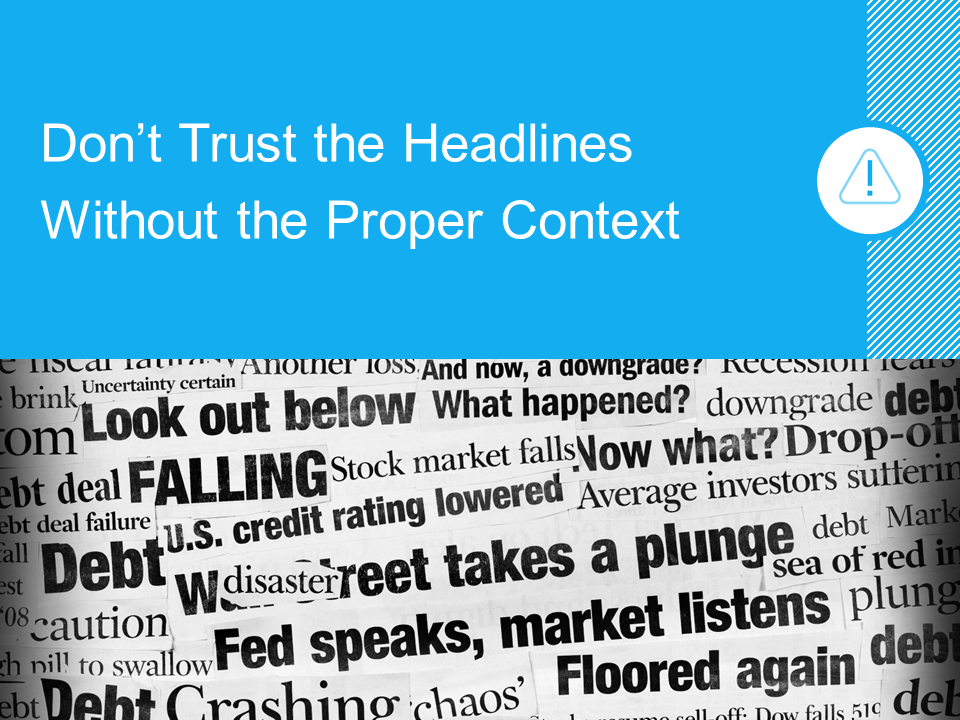 While national real estate forecasts can provide a “big picture” outlook, real estate is local. And as local market experts, we can guide you through the ins and outs of our market and the issues most likely to impact sales and drive home values in your particular neighborhood. Confused about what’s going on in the housing market?  Lean on a professional.

If you’re considering buying or selling a home in 2023, contact us now to schedule a free consultation. We’ll work with you to develop an action plan to meet your real estate goals this year.

The above references an opinion and is for informational purposes only.  It is not intended to be financial, legal, or tax advice. Consult the appropriate professionals for advice regarding your individual needs. 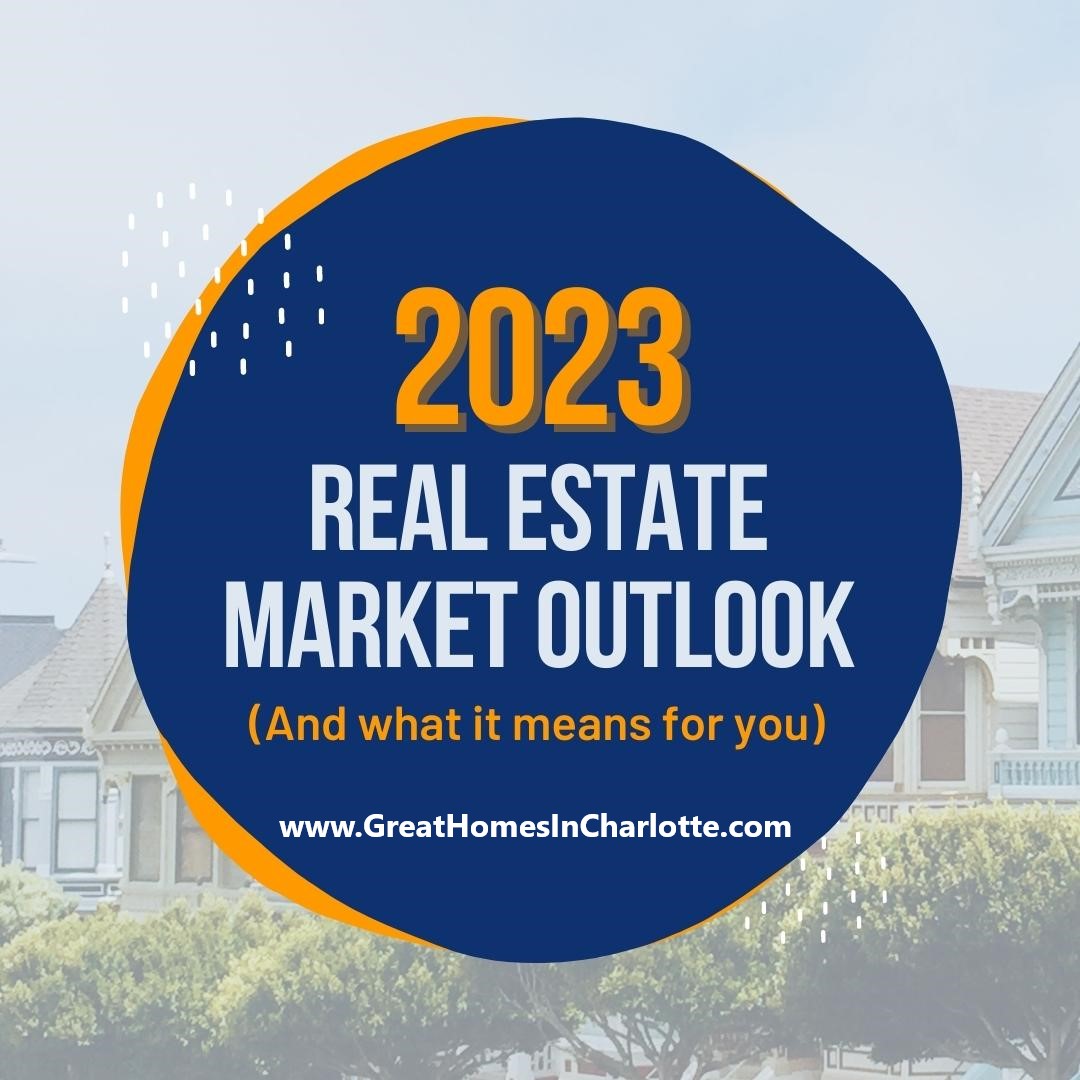